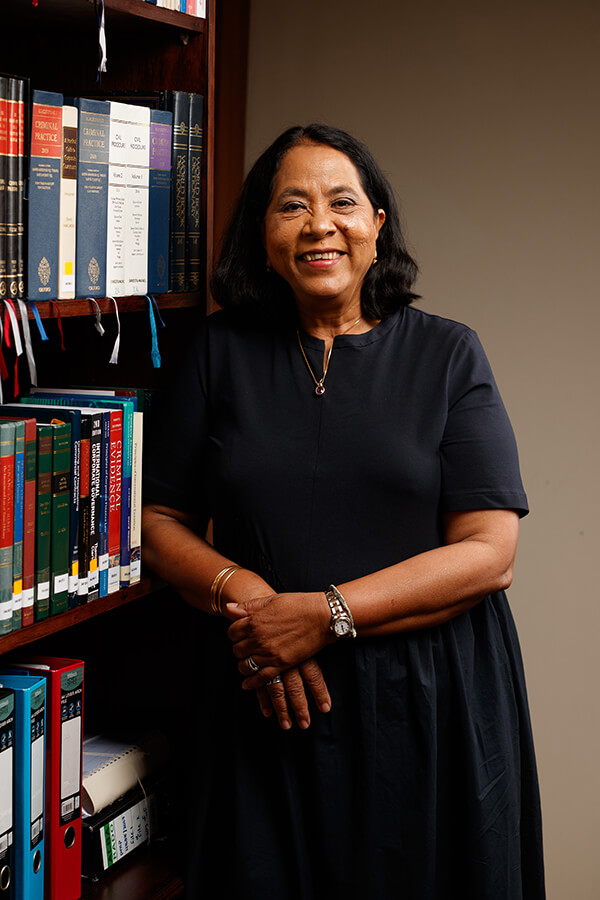 After reading law at the Université Libre de Bruxelles, Belgium and at the Université de La Reunion, France Narghis Bundhun was called to the Mauritian Bar in 1989. She also obtained a Diplôme Universitaire en Droit Mauricien from the Université de La Réunion, France in 2017. Drawing on her wealth of experience Narghis’s current practice focuses mainly on family matters including inter alia domestic violence, divorce, custody, visitation rights, financial remedies, abduction under the Hague Convention, adoption cases and wills and successions. Throughout her distinguished career Narghis has made significant contribution to the development of Family Law within the Mauritian Legal System by appearing in a number of landmark cases. Furthermore, Mrs Bundhun has also acted as expert witnesses at an international level, providing clarifications in relation to Mauritian Family law in cases within the South African and Seychellois jurisdiction.

Narghis has headed a team to draft the Foster Care Regulations in 2006 and also collaborates closely with UNICEF Mauritius, the Ministry of Gender Equality and Family Welfare, ODEROI (Observatory for Children’s Rights in the Indian Ocean Region) and the office of the Ombudsperson for Children. Since 1994, Mrs Bundhun has taught “Wills and Successions” and “Matrimonial Regimes” at the University of Mauritius as well as teaching family law to prospective Barristers, Attorneys and Notaries.

In addition to obtaining a diploma in international commercial arbitration (DCIArb), Mrs Bundhun is also a fellow of the Chartered Institute of Arbitration (FCIArb (Arbitration)). In 2011 she became an accredited mediator by the same organisation. Mrs Bundhun is a trained mediator by the Centre de Mediation and Arbitrage de Paris (CMAP) and by the Mauritius Chamber of Commerce and Industry (MCCI). She is on the list of arbitrators and mediators of the MCCI Arbitration and mediation Centre (MARC) and of the Mauritius International Arbitration Centre. As a result, she acts as arbitrator, mediator or counsel in domestic arbitrations and mediations. In 2021, Mrs Bundhun was appointed as a substitute member to serve on the FIVB (Fédération Internationale de Volleyball) tribunal for a three-year term.

Mrs Bundhun was the first woman to preside the Mauritius Bar Association in 2000. She was re-elected to the position in 2019 and 2020. In 2016 she was one of the first two women to be appointed Senior Counsel in Mauritius.

Registered arbitrator with Mauritius Chamber of Commerce and Industry.

Fellow of the International Academy of Family Lawyers (FIAFL)